for now, not forever

I'm taking a break.
From the whole 'blog thing'.

As I'm sure you have noticed, I haven't been able to update as much as I used too. In the beginning it was for fun, a stress reliever of sorts while the boys napped. And now that they are older I seem to have a lot less time to sit & write type. J's 'schooling' & an almost mobile 'A' mean a busy mummy. I am hoping to do an update here & there, but I'm also trying to be honest with myself. With the holidays steadily approaching, & lots of handmade gifties to be made, my hands will be busy.

So, for now I'm planning a monthly update.
If I find myself with time to spare (ha!) I'll jump on & give a little extra.

My hope for this little blog was to eventually cut ties with Facebook & have a place for family & friends to connect with us. See what the boys are up too. Hear about our adventures. But that has yet to happen.

As we fall into a more steady routine, I hope to once again make time to come on here. But for now-

Clean Yo' House Up Tuesday! (UPDATEx2)

There you have it. I don't usually leave the house when I do the BIG 20, so we'll see how this goes. And don't forget to link up with Emily over at Joyful Abode with your own list, or hashtag it #20choretuesday on IG to share with the other Chore Warriors!

UPDATE:
Noon-So Breakfast, #17 (shopping), lunch & getting the boys down for nap time took up the entire morning! Hoping to quietly get some things knocked off the list while they sleep, but 'A' is a short napper so not sure how much I can get done. On the plus side- I am 2/3 done with Christmas gift shopping! And I am proud to say that I have SAVED more than I spent! I still have 6 people left on the list, plus some stocking stuffers & a basket full of handmade gifts I need to get started. My goal is to be done by Thanksgiving...we'll see how that goes.

8pm- So, I got about 1/2 done. Not as good as I had hoped, but that's ok. I did a few extra things that weren't on the list though:
type up/email boys christmas list to family
type up my birthday list
organize Christmas gifts & write up list of recipients
have a moment to myself & just veg out

In light of my recent "I just deleted half of my blog pictures" debacle, I had to step away for a little bit. The overwhelming rush of anxiety I got every time I thought about it was just too much. I hardly have time to sit down to post new entries, let alone time to go back to the very beginning & redo months worth of old ones! I was able to fix my Top 5 posts that get a lot of Pinterest traffic, but everything else is just going to have to wait. If there is an old post or recipe that you want to view that is jacked from my stupid stupid stupid mistake, then just let me know & i'll put it on the top of the list. Because that's what friends do for each other.
Speaking of friends...wanna be a friend & come over & fix my stupid stupid stupid mistake?
No?
Oh, were not those kind of friends...I see.
No really, it's fine.
Now I know where we stand, that's all.
Anyways, "friend", here's some updates of the goings on around here-

School:
Our learning time has been hit & miss lately. 'J' was horribly congested for over a week due to some sudden weather changes around here. With congestion also comes a pretty negative toddler attitude. My number one priority with our lessons is to keep them fun & engaging, not to force them on him. When he says he doesn't want to, then we don't. I would hate to make learning & gaining knowledge so MANDATORY that it puts a bad taste in his mouth about it all. We canceled our library day & several of our other plans on the schedule & instead lounged, got lots of fresh air, watched some movies, relaxed & took things easy. Not to say we didn't do ANY learning, but we did cut back. Now that he seems to be himself again, we'll get back on track. This morning we went on an adventure & hand delivered some homemade Pumpkin Spice Chocolate Chip Cookies to our local firefighters at the Station! We even included a 'J' original art piece to hang on their fridge :)

Family:
Other than the congested toddler, we are also enjoying the hell company of a seriously teething baby. 'J' was a really good teether. He didn't cry all night or any of the standard things you hear about. He did give us some rough patches here & there, seeing as how he took FOR-EV-VER to get each & every tooth. But this little dude, 'A', yea...he's text book. Want an example? He was up screaming 5 times last night, & nursed every single time. It's like having a newborn again....only 21 lbs & super pissed. He has also mastered the art of the "Craugh"...cry laugh. One minute he's giggling...then cackling...then whimpering...then crying tears of sadness. Poor little dude. It's quite heart breaking. He has his 2 bottom teeth, & a 3rd bottom has just broken through. He's also on the move. Not full on crawling, but dragging that 21 lbs as far & as fast as he can.
Moving on to the bigger dude- 'J' is doing awesome with Potty Learning. He has recently been having some accidents in his bed, but most of the time we kind of already know it's going to happen. Either we let him drink too late, or our schedule was pretty messed up, or he did not feel good & could care less if he lay in his urine. BUT, overall we are still proud of how awesome he is doing. We have only had ONE accident while out of the house, & that was when we were at the zoo on the playground & I had to RUN us all the way to the other side for a bathroom & we didn't make it in time. And no...he didn't pee on me. This was a solid accident...yea, so that sucked. Recently we had to make the decision to teach him to pee outside. Desperate times call for desperate measures. Unfortunately he enjoyed it so much that he now feels confident enough to drop trou by himself when he is outside & "potty on fowers", regardless of where outside we are. So there's that.

YOU KNOW THAT MOMENT WHEN YOU REALIZE YOU JUST DELETED HALF THE PICTURES ON YOUR BLOG?!?!?!?! AND YOU CAN NOT UNDO IT?!?!?! AND YOU GET THE "I'M TOTALLY GOING TO PUKE ON MY COMPUTER!" FEELING?!?!?!

Needless to say I will be under construction for a bit...

Just popping in to let you all know I'm still here! I know I am behind with a school update, as well as other things, & they're coming, I promise!
We have been so busy that I feel like we've hardly been home. It's starting to show a little in the kids behavior, so I'm hoping to bring things to a halt after our planned playdate tomorrow. And with time home will come time to sit & update this here blog.

(Ugh, typing that made me gag a little. Seriously, I apologize....that was horrible. As you can see I'm a little rusty...)
Posted by Dudette at 24.9.12 No comments:

Without a doubt,
Hands down,
My absolute favorite time of year. 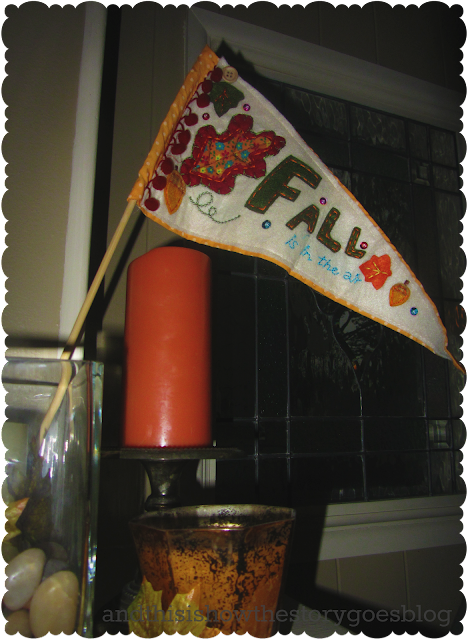 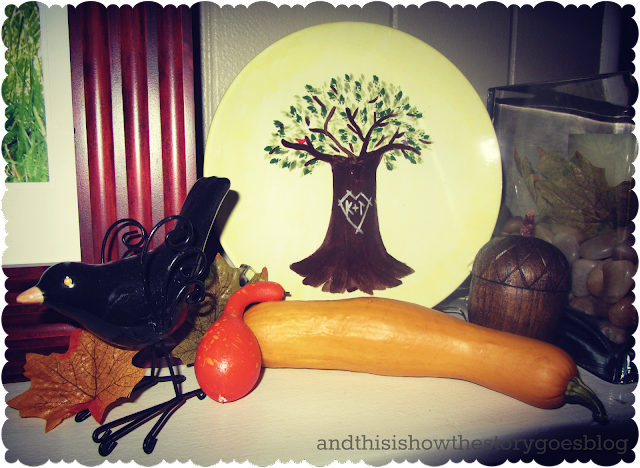 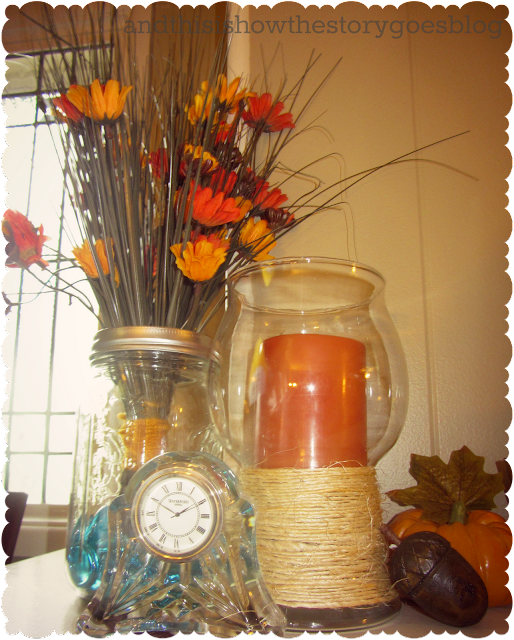 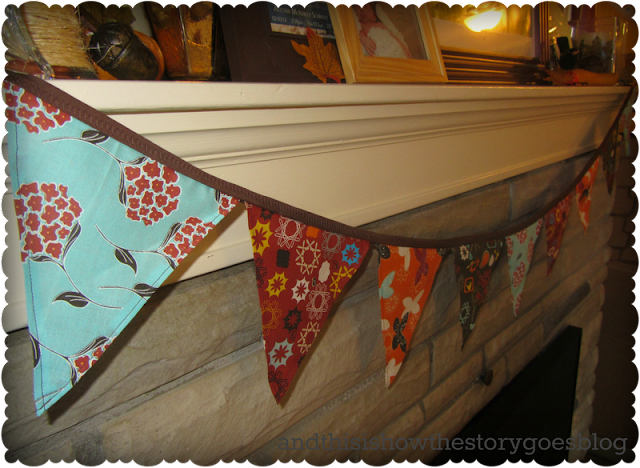 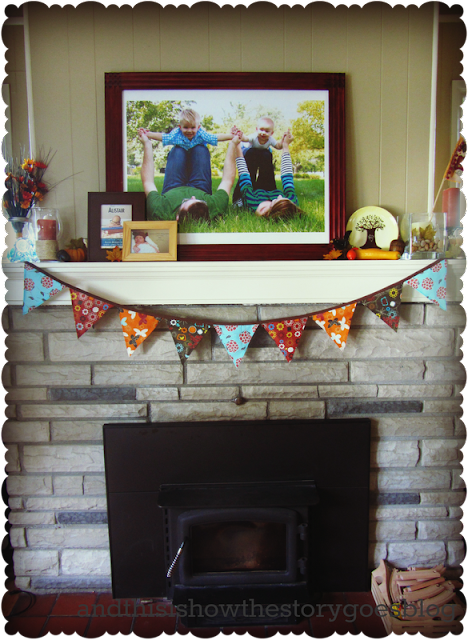 I am so pleased with my Fall Mantle. In the three years we have been here this is the first time I have really done my mantle up. I have put up stockings for the holidays, & changed out some candles for spring/summer. Last fall I had a few leaves & mini gourds. But this, this is a real mantle.
I'm even more pleased with the cost! I did this all for less than $30!! Bunting & giant photo included! I found some fab bargains at Hobby Lobby (it was my first time!), reused/upcycled some stuff from around the house & got those Dollar Store leaves/mini gourds back out from last year. Just under $20 at Hobby Lobby covered the fake flowers, fabric & binding, wooden acorns, pumpkin & little black crow. The 20x30 print was less than $10 at Costco!
Then I whipped up a little felt garland for the china hutch so it didn't feel left out of the festivities. And I will enjoy every day that I get to look at it, up until December 1st. Then we'll sweep up the leaves & celebrate the snow. 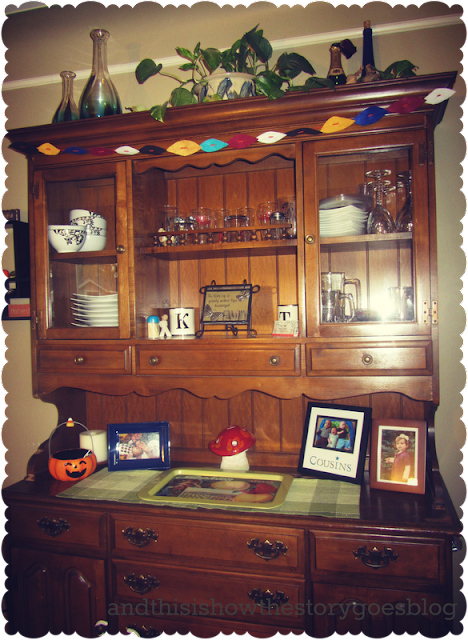 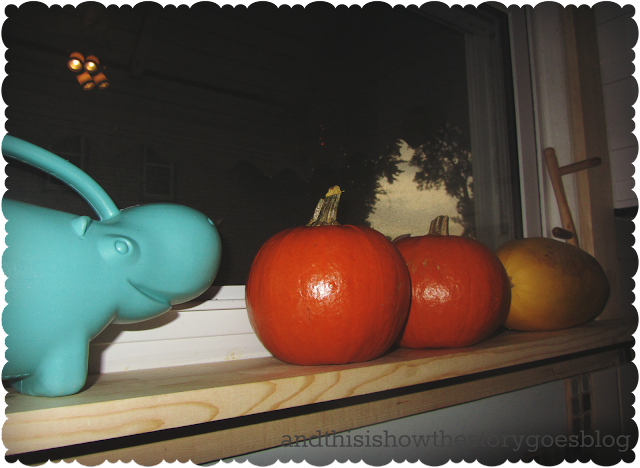 Do you go all out on your mantle? If you don't have a mantle, is there a special room or area you tend to focus on? Any tips for low cost decor you wanna pass this way?
Posted by Dudette at 20.9.12 No comments:

Welcome back, boys & girls :)
Week #2 in our little Learn & Play room went really well & was spent with
the Letter Bb, the Number 2 & the color ORANGE 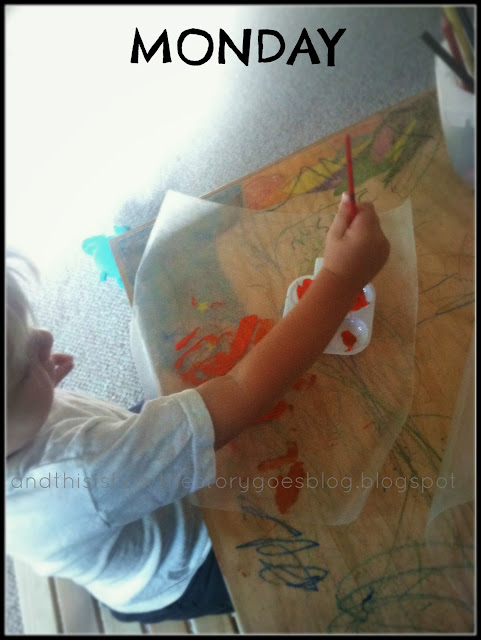 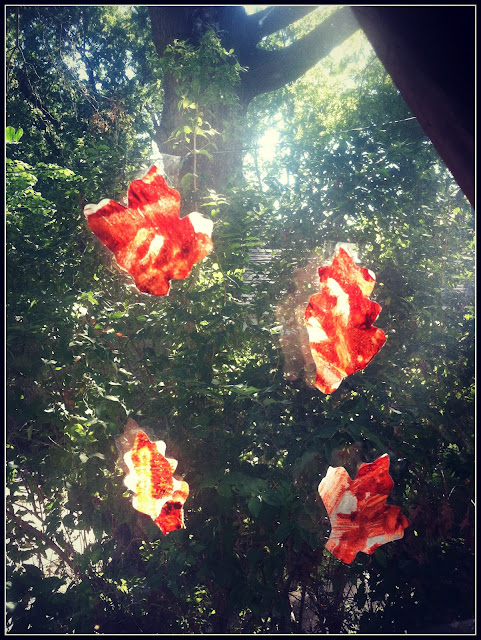 Monday's craft was ORANGE Painted Wax Leaves :) 'J' painted a piece of wax paper & we pressed a second sheet on top. After it dried a little we traced leaf cookie cutters on it & I cut them out. We taped them on the window to admire them in the shining sun. 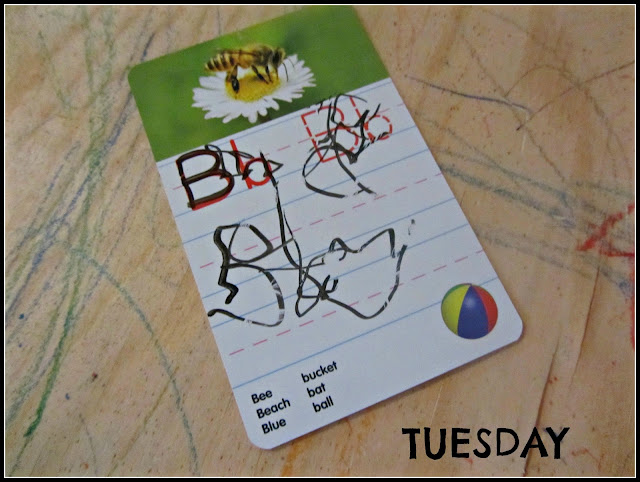 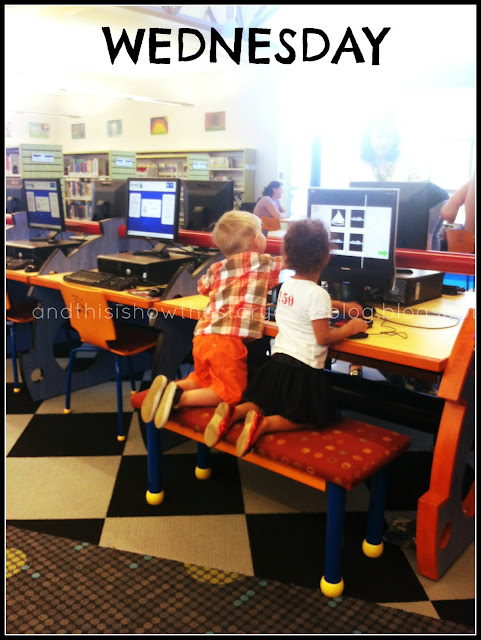 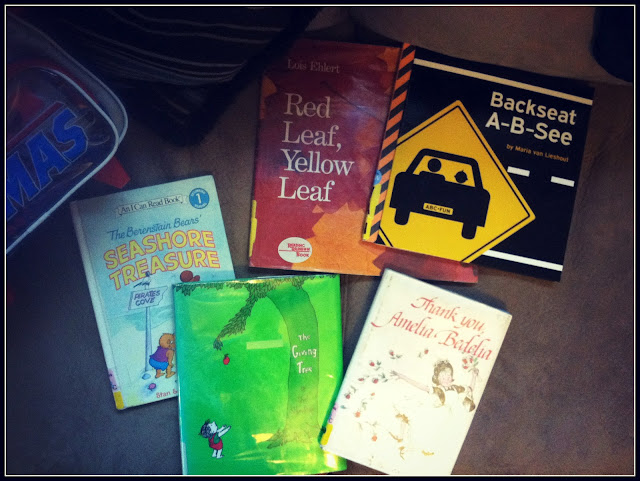 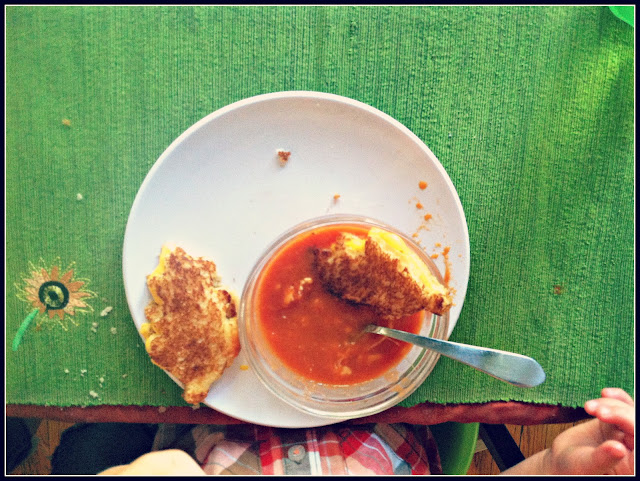 Wednesday we headed to the Library for Story Time. I was happy to hear that the topic for the week was "Ones & Twos", how perfect for us! Later that evening for dinner we made homemade Tomato Soup & Grilled Cheese Leaves :) The perfect dinner to cover our lessons so far, Two Fall Leaves, One bowl of Red Soup , & Orange Cheese :) 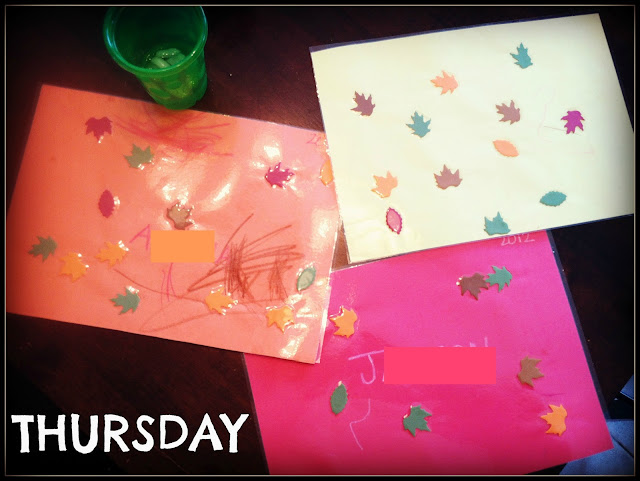 Thursday we took our craft with us to my sister's for a Playdate :) My SIL & nephew joined us & we helped the kids make Fall Placemats! They decorated sheets of construction paper with foam fall leaves & pretty crayon doodles, then I used our heat-less laminator to seal them. Such a fun & simple project. 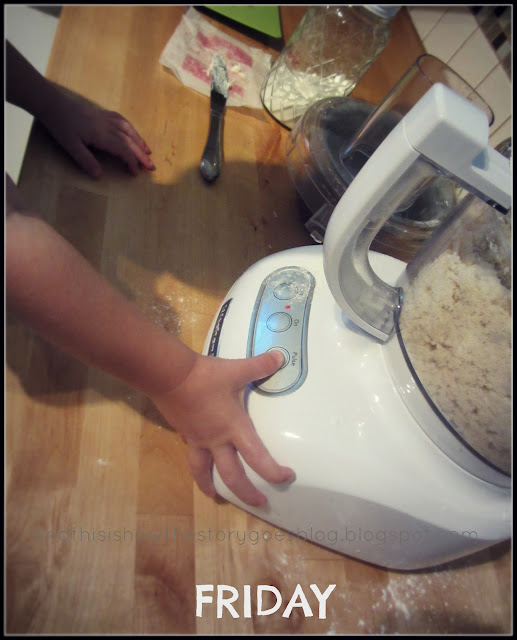 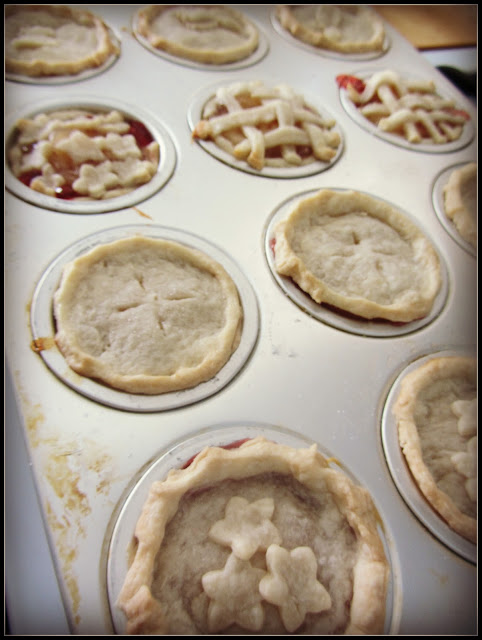 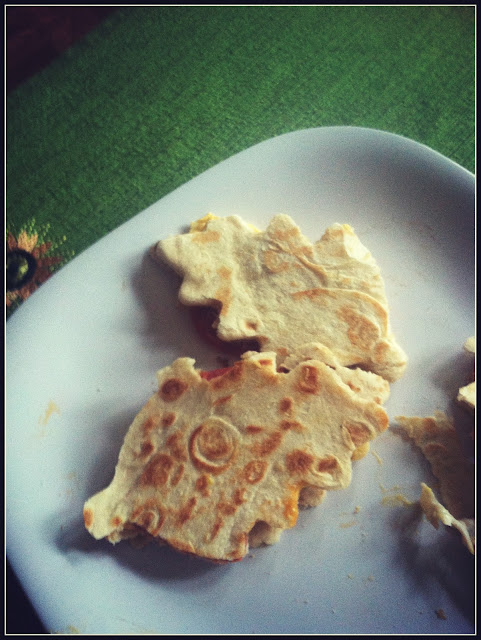 In Kitchen Class friday we learned how to make pie crust (using this simple recipe). While it chilled in the fridge we enjoyed a tasty lunch of Cheesy Leaf Melts :) Cheese, turkey slices & pepperoni sandwiched between tortillas & heated in the skillet. They were a BIG hit. Later in the afternoon we rolled out our dough & made mini fruit pies!
(press dough into cupcake pan, fill with fruit filling, top with dough rounds, bake in 375* oven for 15-17 mins)

It is so satisfying every time I notice him repeating something we have covered in our lessons. Knowing that he is not only learning, but that I am teaching him valuable knowledge.

Know what else is satisfying? Those tasty fruit pies ;)
Posted by Dudette at 18.9.12 1 comment:

Dudette
United States
Married to a cool dude, mother to two little dudes- guess that makes me a Dudette ;) When I'm not caring for 'ma boys' I pass the time crafting, cooking, baking, reading and laughing...lots of laughing. On Instagram? Follow me (mama_kat) on IG to SEE the story unfold ;)

ALSO BY THE AUTHOR

Whats on my Blog Shelf